The Wabbit and the Carrot Funcation 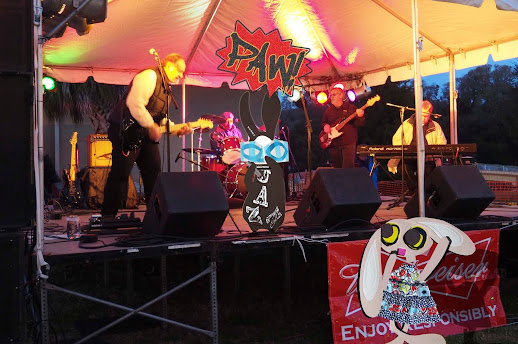 The Wabbit had one more thing to take care of before his Staycation was over. He had agreed to perform with Lovely Lapinette and the joint was jumping. So he jumped on stage and grooved, while Lapinette smooched and patted her ears. Jazz funk music was driving hard and for a while so did the Wabbit. Then he stopped and fished out a harmonica from his fur. Its wail cut across the music but the band paid no attention and funked on. "I'm funkin' on down, to New Orleans," chanted the Wabbit. Lapinette pouted and sang in a cut glass accent. "Smelling of whisky and old blue jeans." "Funk it!" said the Wabbit. "Funk it," called Lapinette and she patted her ear in a Gilda fashion. It was impossible to ignore the driving rhythm. The band was a funky train and it just kept rolling. "What you got on board?" shouted the drummer, sternly. The Wabbit suddenly grinned. "We got a funk load of carrots," he yelled, "let us through!" "Funky carrots!" yelled Lapinette, "out of our way!" For a moment the Wabbit's harmonica did sound like a train load of carrots coming down the track. "We only got carrots," breathed Lapinette. "Then you got nothing to pay," shouted the drummer. The music drove on like an express. Then suddenly Lapinette turned and yelled, "We fooled you, we fooled you, we got celery. All celery." The audience cheered, the music faded and the Wabbit, Lapinette and the band made their bows. "How do you feel?" asked the Wabbit. "Completely funked," said Lapinette.
[Thanks to Allen Weber, Hot Shock, for the suggestion and background photograph.Buy Allen's music at CDBaby ]
at April 25, 2016