5. The Wabbit and the Familiar Spirits 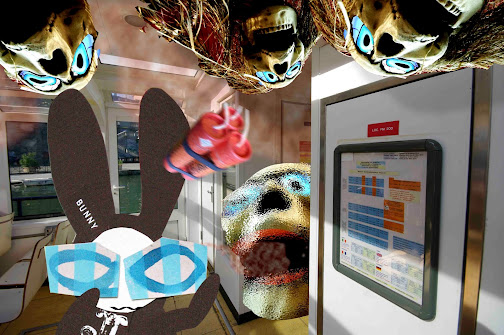 The Wabbit hardly had time to do anything technically wearable. Monsters appeared from every cranny and soon the ferry was full of them. There was something familiar about the creatures and Wabbit was suitably contemptuous. Besides, he was on his holidays. He plunged a paw into his fur and swiped his app in good faith - but although it it was extensively extensive it did have some limitations where monsters were concerned. The Wabbit didn't care. He grinned and groped for something else, something long forgotten. He located it, pulled it out and threw it. The object exploded in a fine red mist to which the Wabbit was totally impervious. Known as Rabbit's Revenge it was the hottest chilli known to the civilised world. Plastic melted, paint peeled and the surface of the river boiled with a crimson glow. The monsters coughed and spluttered and choked but the Wabbit happily ingested the mist and declared it delicious. He was having a wonderful time. If monsters came close he merely breathed at them and they recoiled, whimpering, to the far side of the boat. He tried that several times but eventually he got bored and pushed them overboard. For a while he watched, as one by one they sank under the launch and disappeared. He swiped his wearable technology app and his fur told him he was having fun. The Wabbit's 28 teeth pulled back in an expression of pure delight. But he couldn't help checking the hour. "Time flies when you're enjoying yourself," chortled the Wabbit.
at April 06, 2016