1. The Wabbit and the Speckled Wind 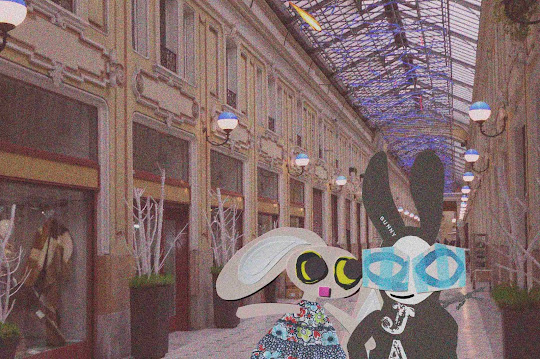 The Wabbit and Lapinette ambled through the arcade, sheltering from a hot, dry wind that scooped dust and hurled it against shop windows. The Wabbit coughed and slapped his coat. The dust was everywhere - a red speckled dust that gouged bricks one by one. "This is ghastly," said Lapinette. "Just the Sirocco," said the Wabbit. All the same, his nose wrinkled. The Sirocco was relentless and it blew hot air through a cold day. Everyone was twitchy. The wind made children cry and grown men weep. It engraved glass as it passed and bartenders gave up on polishing. Lapinette tucked a paw into the crook of the Wabbit's arm and found the Wabbit's paw was on his automatic. "Emergency time?" she murmured. "It's always emergency time," said the Wabbit. He ran his paw over a broken safety catch. Two sudden cracks parted the wind and took the stage. "Nice clean cracks," said the Wabbit softly. "That's quite a wind," breathed Lapinette. "A wind with artillery?" said the Wabbit. Lapinette looked up - then back. "On the way in, did you see someone fixing the floor?" The Wabbit scuffed a foot in the dust and stared at a prone body. His 28 teeth were smiling but changed quickly into a ragged comb. "He's been laid off." Speckled dust began to shroud the figure. The Wabbit pulled Lapinette's paw gently in the direction of a store. "Let's find some fancy scarves and information."
at April 27, 2016