7. The Wabbit and the Invited Ghost 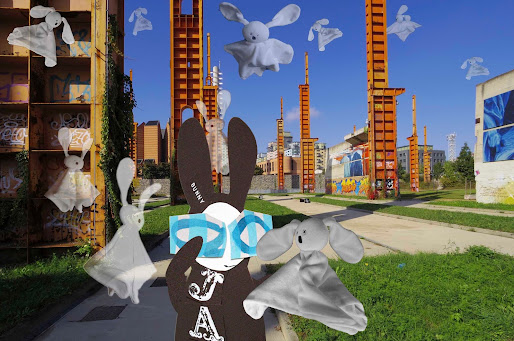 Now the Wabbit was really enjoying his break. So he headed to Pluto Park where he knew he'd run into one of his friends. He hopped up and down and all around the iron towers whilst whistling a happy tune. Nothing happened and all was quiet. He wondered whether he was whistling loud enough and doubled his efforts. Then he heard what he was waiting for. It was like whistling too, but spooky. It got louder and louder and eventually Ghost Bunny fluttered down to greet the Wabbit. "I came to haunt your holiday." The Wabbit pretended to flinch. "Proceed," he nodded. Suddenly the air was full of spectres, coming and going and shouting,"Alarm! Frighten! Scare!" The Wabbit saluted heartily. "A terrifying display. Thank you." Everyone in the Wabbit's team was quite aware that Ghost Bunny was in love with the Wabbit, and that she had been ever since she followed him back from Pluto. In turn, they also knew of the Wabbit's deep affection for Ghost Bunny. He held out a paw. "Boo!" said Ghost Bunny. "Alarmed to meet you," replied the Wabbit. "You're just saying that," said Ghost Bunny, coyly. The Wabbit laughed. "I'd be too scared to trick you." "Wabbit, are you enjoying your staycation?" asked Ghost Bunny. "Things are just a little too quiet around here," smiled the Wabbit. At that moment there was a strange noise in the distance. Then another just like it. The Wabbit and Ghost Bunny looked at each other and grinned, "Trouble ..!"
at April 11, 2016