2. The Wabbit and the Ancient Ammo 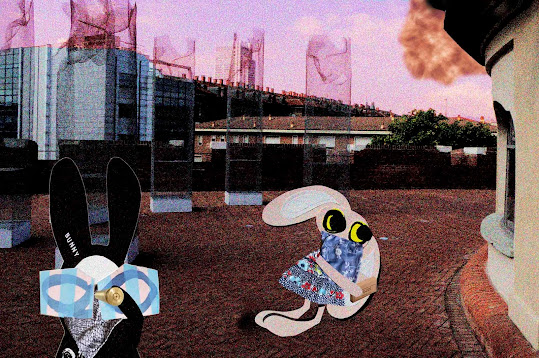 Lapinette and the Wabbit worked quickly on the rooftop. When the Sirocco blows through Turin you can't waste time. They were both enveloped in speckled red dust that swirled from the horizon - and in the blast, things had a tendency to vanish. Lapinette grabbed a cartridge box and read the inscription. "Never heard of it," said the Wabbit. Lapinette's fur stood on end because the Wabbit had heard of all that sort of thing and a bit more besides. "Never seen this before either." His voice was a mumble in the wind. Lapinette could hear it nonetheless. "It simply doesn't exist," said the Wabbit. Lapinette waited and shook dust from her scarf. "It has to be something." "It is really something. It's an ancient Roman bullet." "Nonsense," spluttered Lapinette, "how do you know?" The Wabbit looked closely, screwed up his eyes and read the lettering. "It says ... 'Up you, Crassus.'"  Lapinette laughed. "It must have been Spartacus then." Her voice was sarcastic - but the Wabbit tucked the bullet into a plastic bag that he had in his fur. "It's a ghost bullet, that's what it is." The Wabbit slapped his fur and shed speckled red dust far and wide. "There are recent sightings of Roman centurions marching beside Loch Lomond bearing current day weapons." Lapinette shook dust from her ears. "I expect the bars were open late that night." "Someone said bar!" grinned the Wabbit.
at April 29, 2016