2. The Wabbit and the Staycation 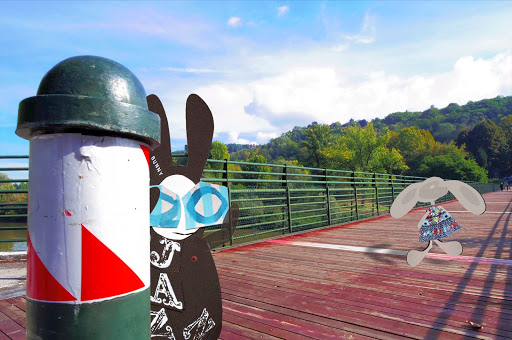 Lapinette's emergency whisky spread warmly through the Wabbit's fur. He steadied himself against a post and waved. "I like it here," thought the Wabbit. Lapinette had suggested a vacation and the Wabbit had joked. But he was struck by one of his more interesting ideas. "I'll have a vacation, but I'll stay right here." Lapinette was delighted and hopped off to the furdressers. The Wabbit clung to the post. The gentle sound of a small motor boat hung in air and vanished. The Wabbit felt soothed and basked in the sun. But his eyes followed Lapinette as she hopped into the distance and he knew the word would get round at speed. Soon, his whole team would pass by and everyone would wave. They would all ask how he was enjoying his vacation. The Wabbit was horrified but he felt a warm glow as the emergency whisky suggested another idea.  He was in a process of preparation for the Wearable Technology festival and for this he had developed a small wearable app which he called Wabstealth. Once activated, the Wabbit became to all intent and purposes, invisible. The Wabbit rummaged in his fur and swiped. His paw began to disappear but stopped when only half transparent. He waved the ghostly paw. The paw reappeared. Wabstealth had never been fully tested and was barely operational - but the emergency whisky thought otherwise. "I'll blend in," grinned the Wabbit.
at March 30, 2016