9. The Wabbit and Prison Reform 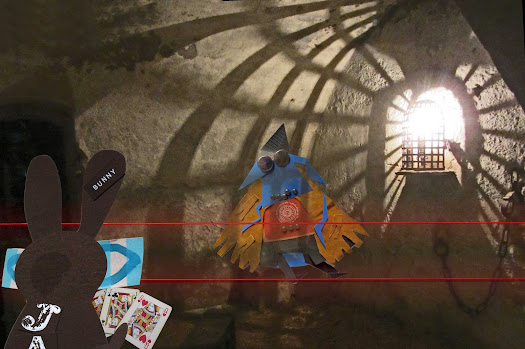 The Wabbit hadn't the faintest idea what to do with the prisoner and he grinned wryly to himself. The Wabbit didn't hold with prisons, because he thought they didn't work. But in a medieval building known only to the Wabbit and close associates, he maintained a detention room. "I hope your treatment has been satisfactory," he announced. The Shaman sighed. His batteries were depleted and he wished he'd used solar cells instead. "Did you enjoy the detention movie of the week?" chirped the Wabbit. "I'm tired of the Great Escape," retorted the Shaman. The Wabbit played with the Force Field switch and made it crackle - which was the full extent of its effectiveness. He had built it in his shed and it simply didn't work. Nonetheless, the Shaman shrank back. So the Wabbit had an idea. "Have you thought of trying show business?" The Shaman shook his head. "You could pull yourself out of your own hat," suggested the Wabbit. The Shaman thought about it. "Is there any money in it?" "You can print your own money," said the Wabbit, "it's really all the rage." "What about flashing lights?" said the Shaman. "You'll have to come with a warning!" laughed the Wabbit and he hopped straight through his force field and sat down. The Shaman watched as the Wabbit showed him three cards, one of them the Queen of Hearts. The Wabbit slowly placed them face down. Suddenly paws and cards blurred, then stopped. "Now," asked the Wabbit, "what happened to the Lady?"
at July 01, 2015