3. The Wabbit and the Smell of Money 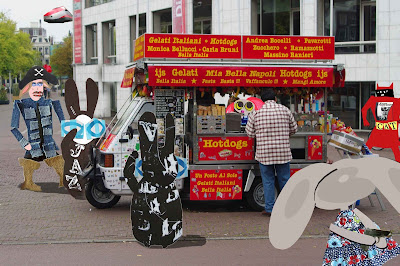 The Wabbit sniffed. All his funds were impregnated with a clinging odour and no matter how they transformed, they kept the smell. In a dingy neighbourhood in Amsterdam known as Brievenbus, the team was hot on the spoor. The Wabbit peered suspiciously at the advertising and shook his head. The truck was as Italian as Advocaat and the language was choice. So the Wabbit nodded and Tipsy perked her head above the counter. "Gilt flavour hot dogs please." "We don't have none," said the vendor, "a bunch of German tourists have been and gone and bought the lot." "Oh dear," said Tipsy, "where were they from?" "Frankfurt," said the vendor. "At's where I gets me 'ot dogs." Tipsy's eyes revolved three times. "Look into my eyes," she crooned, "and tell me why any sane Frankfurter would take hot dogs home." The vendor's eyes swirled too. "It was a special delivery and I puts 'em asides and waits." Wabsworth drew close. "Tax office, I demand to see your accounts for the last week!" "I only poor Italiano," said the Vendor. "I no know what you say." "Voglio le ricevute degli hot dog," yelled the Wabbit. The vendor's eyes went blank. Tipsy grabbed a dog eared notebook and flicked through it. "Hot Dog Laundry and Liquidisation, GmbH, Haarschnitt." The Wabbit looked at Tipsy. "How did you get here anyway?" "I'm a stowaway," said Tipsy. "You're working your passage," smiled the Wabbit.
[Brievenbus : Dutch. Letterbox ; Haarschnitt: German. Haircut]
at July 08, 2015