2. The Wabbit and the Time less Taken 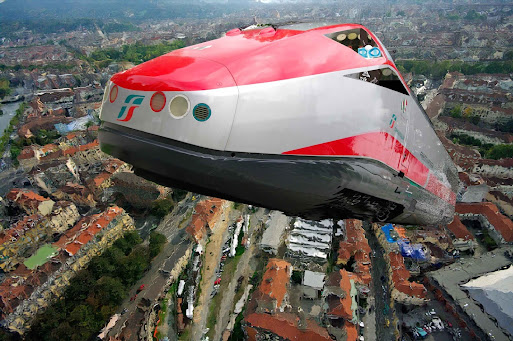 The cab door slammed shut. "I need you for a mission, Quantum." The Wabbit figured he could find his missing funds by going back in time. But he wanted to go alone and so alerted no-one, certainly not Quantum the Time Travelling Train. The Wabbit saw the regulator swing and felt engines vibrate - slowly at first, then at speed. Outside, the city warped round the train then streets and buildings flickered past like snow in a blizzard. The Wabbit smiled. He'd expected some trouble - at the very least a demand for a requisition order. "I know you don't like short time hops, Quantum. And this is only a matter of weeks." "I'm all prepared," said Quantum, "So rest easy. It's organised." The Wabbit was nonplussed but Quantum laughed. "The paperwork is done and you'll find it on the windscreen shelf." "We'll have to stop for supplies," said the Wabbit. "Taken care of," said Quantum. "There's a stock of salad sandwiches, coffee and a supply of hard and soft drinks in the fridge." "How the binky did you know?" asked the Wabbit. "The team told me." "The team?" sighed the Wabbit. "Your team," said Quantum. The Wabbit hopped up and down on the footplate. "Where are they now?" "In the dining car," said Quantum. "Who?" demanded the Wabbit. "Lapinette," said Quantum. The Wabbit waited. "... and Skratch and Wabsworth." "Is that the lot?" groaned the Wabbit. "Captain Jenny," added Quantum. The Wabbit smiled and gave up. "They'd better have valid tickets."
at July 06, 2015