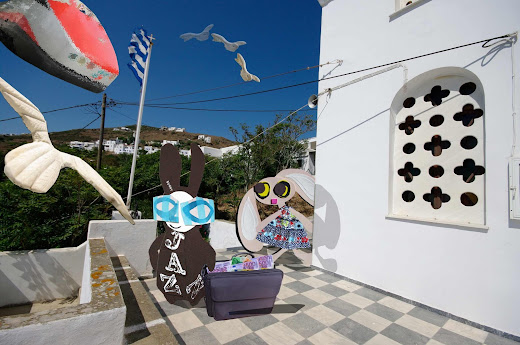 A clapping of wings heralded Parakalo the Dove. He hurtled to their meeting place from the best blue sky he could arrange at short notice. At exactly the same time, the Wabbit and Lapinette shimmered in from a productive past. Parakalo felt obliged to be formal, so he spread his wings and hovered. The Wabbit opened the bag. "I'm returning what rightfully belongs here." Parakalo cooed softly. "To whom shall I deliver it?" A silence fell and then the Wabbit murmured. "I trust your judgement in the matter." "How much is there?" asked Parakalo. "Enough to run a country for a while," said Lapinette, who had made a careful note of the amount, denominations and serial numbers. "There's only one thing," said the Wabbit with a grimace. Another silence fell. "Money's like a gun," he said. "It smells of its history." Lapinette thought that was very sage but Parakalo merely sniffed. "I can smell hot dogs, Bratwurst to be exact." "So can I," sniffed Lapinette. "It must have got on my fur," sighed the Wabbit. Lapinette was thoughtful. "The Dinosaur Fund got caught up in something smellier than we thought." "The road to smell is paved with good intentions," said the Wabbit. Lapinette gave a wry grin. "But we had to go to smell and back." Parakalo looked serious. "Now the banks have got smell to pay." Then they looked at each other and laughed and laughed.
at July 31, 2015