6. The Wabbit & the Bratwurst Trophy 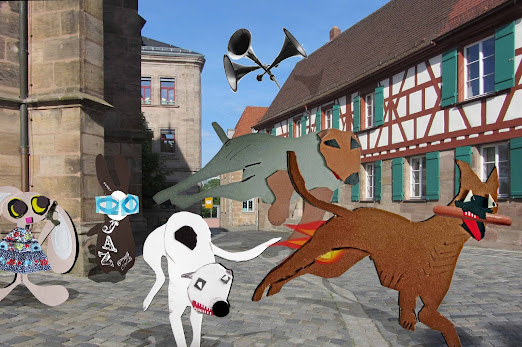 The greyhounds gathered in Nürnberg for the start of the big race. During preparations, they talked of current affairs and the high cost of tripe. But when the Tannoy crackled, they crouched in their starting positions and waited silently. Without warning, smoke burst from Lapinette's automatic and the dogs took off like rockets. Arson Fire belched flame and took a slim lead, but the others gained ground. "It's Arson Fire by a nose, as they go into the far turn," said the Tannoy, "then it's Give a Flux, then Woof Hearted." The Wabbit watched with wry amusement because Arson Fire still had the hot dog between its teeth. "How much did you wager?" asked Lapinette. "Just a flutter," said the Wabbit. "Five euro straight bet on Arson Fire." Lapinette wrinkled her nose. "Treble Forecast ... Arson, Woof then Flux." "How much?" asked the Wabbit. Lapinette smiled as she watched Arson Fire clear the back straight, then chuckled as Woof Hearted charged past Give a Flux. "A month's salary." "Winnings incurred on official Departmental business," shrugged the Wabbit, "are to be submitted with relevant paperwork." "This is a private job," said Lapinette, mentally counting her winnings. The Tannoy boomed.  "Arson Fire first, Woof Hearted second and Give a Flux third." "Bravo," shouted Lapinette and she threw her arms in the air. It was then that the Tannoy crackled. "Owing to a hot dog distraction, the judges are reviewing the race ... "
[Flutter: (UK) A minor bet for amusement. Tannoy: a Scottish trade name, which gave it's name to large space loudspeaker systems ]
at July 15, 2015