5. The Wabbit and a Dog called Fire 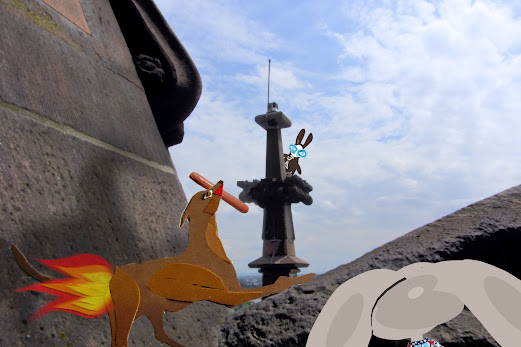 On the advice of the Captain, the Wabbit and Lapinette scaled a tall steeple in the suburb of Haarschnitt. There was a chance they might spot Arson Fire, the greyhound. But just as they were about to give up, they heard a snarl and smelled combustion. "Er-ow wow wow. Er ow wow wow," said Arson Fire in with a combination of growls and vowels. The giant hot dog remained clenched in the greyhound's teeth and flame streamed continuously from its rear end. The Wabbit was clueless about what to do next, so he made a strange whistling noise and said, "Here boy." This met with a terrifying snarl as Arson Fire gripped the hot dog tightly. So the Wabbit called across to Lapinette. "What did he say?" Lapinette looked Arson Fire in the eyes then said, "He wants to know if you have any raw green tripe."  Lapinette was often good at strange things and the Wabbit knew better than to ask. "He'd like to know your name, strange furry one," said Lapinette. The Wabbit stared at the greyhound. "Wabsy," he said, "May I call you Arse?" Arson Fire sighed and turned to Lapinette. "I'm in a rrrrrace." "Wow er wow wow ... wow?" asked Lapinette. "The Brrrrratwurst Challenge in Nürrrrrnberg," woofed Arson Fire, "I'm betting on myself to win." "Is that allowed?" barked Lapinette. "It's not barrrred," said Arson Fire, "and I'm going to clean up." "Odds?" Lapinette made a dog sound between her teeth. "No-one knows me," grunted Arson Fire," "I'll get a hundrrrred to one." The Wabbit ran some math and smiled. "Consider us promoters..."
at July 13, 2015