9. The Wabbit and El Dorado's Place 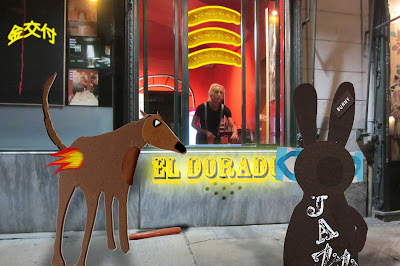 In a less than salubrious location, the Wabbit and Arson Fire approached a premises known as El Dorado. But locals knew it variously as the Golden Handshake, the Golden Digger and the Golden Parachute. The hostess hardly looked at them and effected a special interest in polishing glasses. "Name?" she barked. "Wabbit," replied the Wabbit. The hostess paused. "Going?" The Wabbit frowned and nodded, "inside." The hostess flicked her hair. "Stay?" "Brief, "said the Wabbit. "Hmmph," said the hostess and she turned to Arson Fire. "Name?" "Arse," blinked Arson Fire. The hostess nodded approvingly and spoke gently. "Business?" Arson shook his head. "Pleasure." He blinked some more. "Stay?" asked the hostess, fluttering her eyes. "Indefinite," said Arson. The hostess turned to give the Wabbit a withering glance. "Credit?" The Wabbit was about to say 'cash', but Arson Fire interrupted. "Undated Government Hot Dogs." "Now that," said the hostess, "will do very nicely indeed." She looked from Arson to the Wabbit and then her eyes flicked back. "Are you vouching for the strange furry one?" "I take care of him," said Arson. The hostess nodded again. "Any weapons?" The Wabbit patted his fur and adopted a lop sided grin that usually worked. "Just a Makarov automatic." The hostess smiled for the first time. "You might need it in here ..."
at July 22, 2015