1. The Wabbit and the Finance Haircut 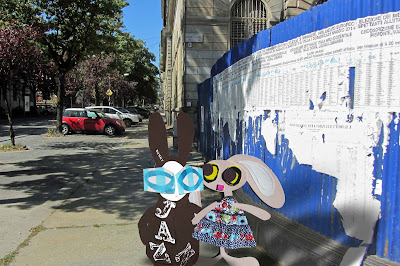 The Wabbit and Lovely Lapinette hopped along Corso Raffaello on their way to lunch. "Any news from the Department?" asked the Wabbit. "Not officially," said Lapinette. The Wabbit pondered for a bit. "Trouble?" "Trouble with tassels on," said Lapinette. The Wabbit brightened but Lapinette didn't. "I'm afraid it's your Dinosaur Fund." The Wabbit's face fell. His Dinosaur Fund was strictly unofficial and provided vital resources for unorthodox missions of the Wabbit's choosing. "I'd hoped it was building up again," he said. "It took a haircut," said Lapinette, "but no-one knows where." The Wabbit's brain was churning. "It was delivered to a letterbox in the Netherlands in undated government gilts." "Check," said Lapinette. "From there it was couriered to a sausage company in Frankfurt and liquidised." "The hot dog route," nodded Lapinette. The Wabbit allowed himself a cautious smile. "A digital transfer should have taken it to Donchester Dog Races where Arson Fire was certain to clean up." Lapinette grinned. "He did and the winnings were considerable. They made their way to the London Borough of Rottingfish for overnight deposit." The Wabbit groaned. "Where is it now?" Lapinette pouted. "It's back, what's left of it." "How much?" sighed the Wabbit weakly. "Twelve euro and ten cent," replied Lapinette. "That's not a hair cut, we've been pumped, scalped and dumped," yelled the Wabbit.
at July 03, 2015