8. The Wabbit and the Golden Sausage 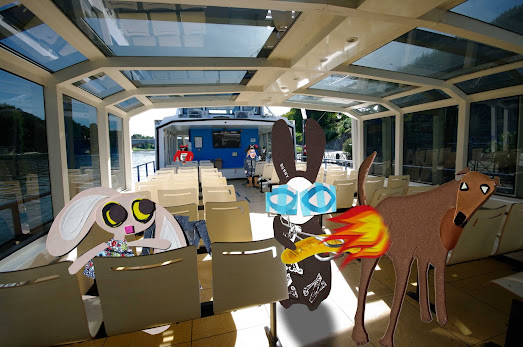 Acting without any particular authority, Jenny, Skratch and Wabsworth seized the Riverboat and sailed to Bamberg to pick up the Wabbit. There the Wabbit searched in his fur, then grabbed the sausage with a pair of cooking tongs. Streams of flame shot from Arson Fire and enveloped it - but nothing happened. The Wabbit nodded. "The sausage is gold all right." "You want hotter heat?" asked Arson Fire." "How hot can you get?" asked Lapinette. "Prrrropane hot," said the greyhound. "Too destructive," said the Wabbit as he peered for markings. And there they were -  999, Frankfurt am Main, 2015. The Wabbit mused. "My Dinosaur Fund got diverted." Lapinette started to hum a song and the Wabbit picked it up. "Gold, Gold, Gold, they just gotta have that gold." Lapinette kept her eyes on the golden sausage. "They'll do anything for gold, won't they?" The Wabbit sniffed and shook his head. "Not this gold." Arson Fire barked suddenly. "Why not?" "Because it still has a trace of Dinosaur Fund." The Wabbit suddenly whacked the gold sausage with his tongs. Sonorous music rang out and played a familiar snatch from Taxman Blues. Now the Wabbit's teeth flashed in a sinister smile. "One thing about gold is - you gotta dig it!" He snapped a paw and laid down the golden sausage to let it cool. "Where to Commander?" called Jenny. "El Dorado?" shrugged the Wabbit.
at July 20, 2015