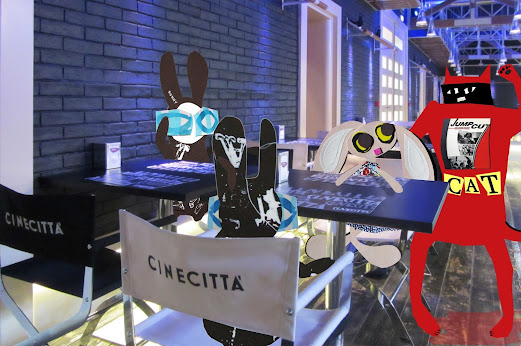 "Hello Spider woman," meaowed Skratch the Cat. The Wabbit had invited Skratch to his favourite caffè to listen to his views on their latest adventure. Wabsworth leaned forward. "Wab's the name. Gumshoe's my game." The Wabbit waved to Skratch and drawled. "The cheaper the shaman, the fancier the outfit." Skratch puffed out his chest and laughed. Lapinette crossed her legs and murmured. "I knew it was a film noir, because I was completely in the dark." "As was your audience," purred Skratch, "and I'm still figuring who was telling the truth." He scrutinised all three then thought deeply. "Wabbit, I saw your deceptive reflection, mirrored in the subway walls." He wheeled to face Lapinette. "You were the femme fatale. You were hidden but possibly hiding the truth. Maybe you and the Shaman were together." Wabsworth was next on Skratch's list. "You took the role of narrator but instead of following and explaining, the plot dragged you along." "I ran interference," said Wabsworth proudly. "What about the Shaman?" grinned the Wabbit. Skratch brushed a paw across his chest. "I considered he might be a sham but rejected it. His was rough magic but he was the real deal." Wabsworth rapped the arm of his chair. "He didn't get the antimatter and he didn't get the female." They instantly paused and looked at the Wabbit. "Where is he now ... ?"
at June 29, 2015