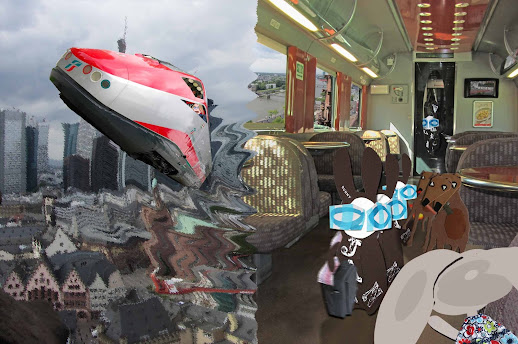 Just as the Wabbit and Arson Fire jumped on board, Quantum departed. With Captain Jenny on the footplate there were no half measures. Quantum flipped to Slipstream Drive and the city dissolved to a sea of banks and beer cellars. "Let's get out of here?" shrugged the Wabbit. Lapinette watched until things stopped shimmering. "It's our money?" "Sure is," said the Wabbit. "How much?" asked Lapinette. "I haven't counted," said the Wabbit ... and he sniffed. "But there's another smell. It's familar." Arson Fire barked once. "Aaargos." The Wabbit paused because Arson Fire was more than he seemed. "The money smells of Argos, the hound," said Arson. The Wabbit wheeled round and yelled down the corridor. "Set new course 132'." Jenny's voice echoed back. "What day?" "Same time as we left," said the Wabbit. "But where are we going now?" asked Wabsworth. The Wabbit stamped a foot. "We're returning the money that isn't ours." Only Arson Fire appeared to have a clue what on earth was going on and he watched the Wabbit intently. "Wabsworth!" shouted the Wabbit. "Get Parakalo on the blower." "No can do," yelled Jenny from the footplate, "we're in slipstream." The Wabbit sighed. "Drop out, we're still in last week." Quantum's engines whined to a halt and they hung somewhere vague as the Wabbit spoke to Parakalo, the dove. "I wasn't expecting a call, Commander," he cooed, "where are you speaking from?" "Last Tuesday," said the Wabbit.
[Argos is Odysseus faithful dog, a greyhound.]
at July 29, 2015