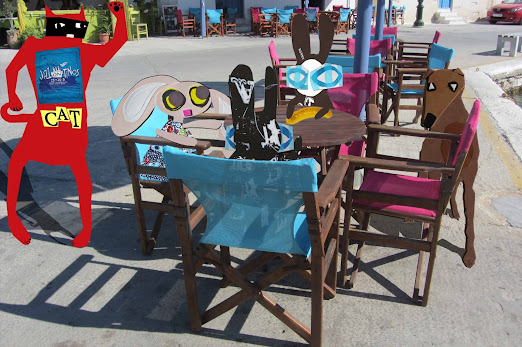 The team gathered and waited for Skratch the Cat. Eventually he hove into sight with a giant wave and a shout. "Now what was that for a rip roaring adventure?" "It was detectively woofy," said Arson Fire, the Greyhound. Lapinette giggled and looked at the Wabbit. "You think you're Sam Spade?" The Wabbit effected a drawl. "I kept putting two and two together but there were so many twos I stopped counting." Skratch meaowed pleasantly. "It wasn't about the money and it wasn't about the gold." Wabsworth looked across at the Wabbit. "So what was it about?" "It was about the journey," said the Wabbit. Wabsworth looked disappointed. "So the Dinosaur Fund made nothing?" The Wabbit smirked. He drew a shiny object from his fur and set it on the table. "I wouldn't say that exactly." Now Skratch pounced. "I knew it. You kept the Bratwurst Bullion!" The Wabbit shook his head. "It got stuck in my fur." "I'll take charge of it," said Wabsworth reaching for the Gold Bullion Hot Dog. Lapinette made a mental note. "That's Good Delivery Bullion, even with unorthodox packaging." "Not to mention cooking," barked Arson Fire. "Well, it's all the money I have at the minute," said the Wabbit, and I'm thirsty." Skratch put his paw in his fur and rummaged. "Maybe I can spare five euro for a fellow traveller." The Wabbit's 28 teeth flashed in the sun. "I'll have a carrot aperitivo with sparkling gold flakes please." "So will I," said Lapinette. "And me," said Arson Fire. Wabsworth pulled out a requisition book. "Does that aperitivo have a name?" "Macwabbit's Gold," meaowed Skratch.
at August 03, 2015