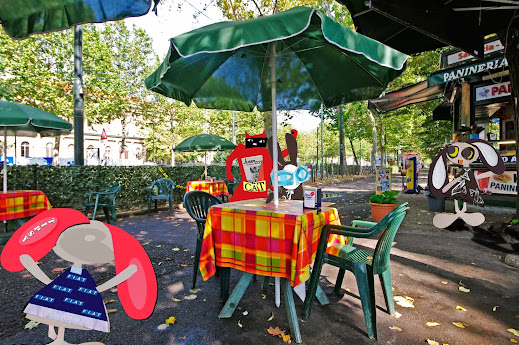 For a while it rained with fury. The Wabbit was early and he snuck under an umbrella at his favourite table and sat it out. Suddenly the sun burst through and brought with it Lapinette, Tipsy and Skratch the Cat, all from different directions. "What's it to be?" shouted Lapinette. "Carrot beer and a salad sandwich," said the Wabbit with satisfaction. It had been a long adventure and he never had expected the intrusion of frackers. Just off the tram, Skratch bore down on the caffè with theories in mind. "That was a most interesting escapade." "Let's have some more," yelled Tipsy. Laughter ensued and when it died away Lapinette asked the Question. "What was that for a sort of adventure, Skratch?" Skratch raised an eye. "It was deliciously soapy." The Wabbit looked at Lapinette and winked encouragingly. "Soap," stated Lapinette in a solemn voice, "is entirely predicated upon matters of desire." "So it was all about your outfit," smiled Skratch, "and gender identity of course." The Wabbit stepped in before things got technical. "You didn't mention fracking and eco-horror."  "Gender, genre, ecology!" shouted Tipsy. "Oh, won't someone get Tipsy a chair?" suggested the Wabbit, sitting exactly where he was and disguising a grin. "I can get my own chair," said Tipsy, "but someone else can get me a little dwink." "What's your poison?" asked the Wabbit. "Brandy, cola and sheared ice," said Tipsy. "I think that's called a Drunken Fracker," nodded the Wabbit.
at March 30, 2015