1. The Wabbit & the Command Movie 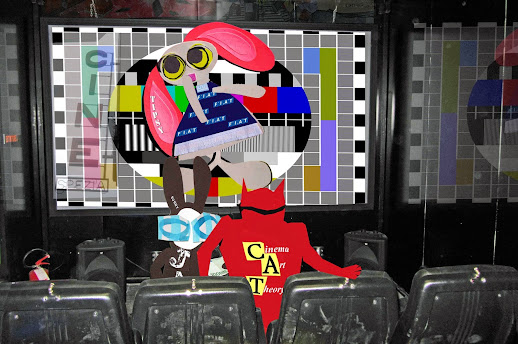 Skratch the Cat arrived at the sleazy viewing theatre where the Wabbit had an arrangement. The matter seemed to be urgent, so he was unsurprised when the Wabbit addressed him in serious note. "Departmental Business." The Wabbit's voice indicated he didn't exactly approve. "This is a direct order, Skratch." Skratch waited for what seemed like an age. Finally the Wabbit spoke. "You have to take Tipsy to the movies." Skratch's fur stood on end. "But Commander .." "I'm certain something can be worked out." said the Wabbit, "now what seat do you usually occupy?" "Front row, middle," said Skratch. The Wabbit shook his head sadly. "You will occupy a rear seat, offset from centre." Skratch gritted his teeth. "During the film, Tipsy will nudge your leg." Skratch groaned inwardly. "What then Commander?" "You will whisper sweet nothings in her ear." Skratch brightened. "About the movie?" "On no account," said the Wabbit. "You will not talk of cinema or film theory and there is to be no mention of semiotics." Skratch heaved a very long sigh. "What next Commander?" "You will escort Tipsy home." said the Wabbit, "where you will kiss her affectionately on the cheek and give her a small box of expensive chocolate liqueurs." And then?" asked Skratch. "Lope away nonchalantly," said the Wabbit, handing Skratch money. "Look, this should cover everything." Skratch spoke cautiously "May I take a taxi?" "Only if there's a blizzard," said the Wabbit.
at April 01, 2015