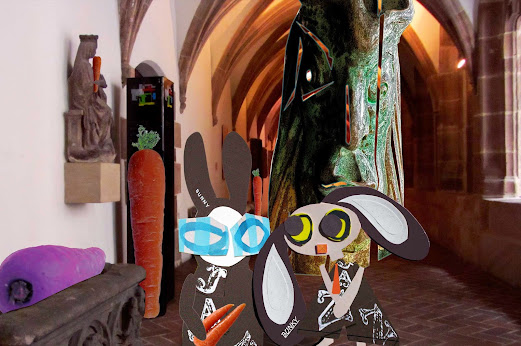 Back at the Carrot Club, the Wabbit handed over the reigns of power. "Lapinette, I'm proposing you for Grand Daucus." Lapinette looked surprised. "When will I know I'm elected?" "As of now," said the Wabbit, "but there's only one small thing." Lapinette waited. "You have to continue as Bunky Green." Lapinette knew there was more. ".. and you have to wear the outfit," smirked the Wabbit. Lapinette also smirked. Despite everything, there would be a female in the Carrot Club and it was all her doing. The Wabbit continued effusively. "I thought perhaps the Carrot and Artichoke Clubs might combine." Lapinette's ears twitched. "Did you hear that creaking?" "Oh, the old building needs refurbishment," sighed the Wabbit and he waved his paw in a dismissive fashion. "So what about naming us the Cartichoke Club, do you think?" "I think I hear noises," said Lapinette. "It must be the heating," said the Wabbit. Suddenly the corridor grew icy cold and Lapinette shivered in agreement. "It must be." She pondered for a while. "What kind of heating is it?" "Gas," said a voice. Lapinette furrowed her brow. "Did you say gas, Wabbit?" "No, not me," said the Wabbit, "it's oil anyway." "Oil!" The sound ricocheted along the corridor. The Wabbit looked at Lapinette and Lapinette looked back. "I have an idea," said the Wabbit. "I'm all ears," said Lapinette. "Run!" yelled the Wabbit.
at March 27, 2015