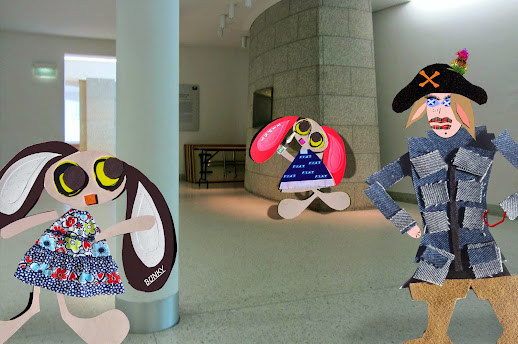 "It won't be ready in time," said Jenny. "It was supposed to be ready last week," said Lapinette. "They'll think we're broke," said Jenny. "We'll say it's minimalist," said Lapinette. A pregnant pause hung silently, but it was broken by a pop and a hiss. "We'll need more beer!" yelled Tipsy. Lapinette wrinkled her nose and envisaged the visit of the Carrot Club delegation. "Maybe they don't drink beer." "Of course they drink beer," said Tipsy and to prove it, she drank some herself. Jenny placed her hook on her hip. "We can always get beer, but we need more members for the official visit." "I'll move around a lot," said Tipsy. "Then I'll go outside and come back in dressed as someone else." Jenny mentally doubled the beer order and looked around. The premises were a recent acquisition and the outcome of an arrangement that involved stuffing envelopes for charitable appeals. "We haven't a stick of furniture," said Lapinette. "They can sit on the floor." Tipsy slid down the wall and squatted on the floor. Lapinette shook her head. "If we can't find more members, the Artichoke Club will be a laughing stock." Tipsy looked up. "I'll get Fitzy and Mitzy." Lapinette smiled. "They don't have to be female. Our Club is open to all, regardless of gender." "Then why have we only got three members?" asked Jenny. "Self discrimination!" shouted Lapinette.
at March 02, 2015