15. The Wabbit and Quantum's Leap 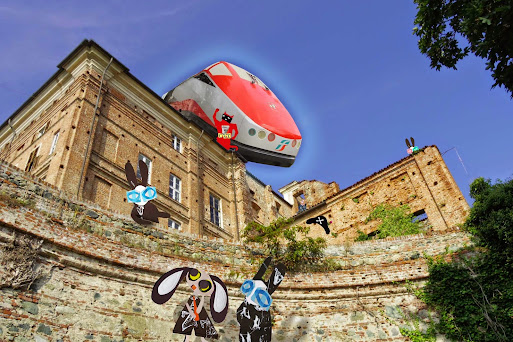 The remnants of both Carrot and Artichoke Clubs waited at the Other Castle. But the Wabbit was uncertain. To beat the Fracking Entity he needed help but he was hesitant. "Call him." Lapinette was still posing as Bunky and straightened his tie. The Wabbit shrugged, reached under his fur and pressed a button no one knew existed. Nothing quite compared with a visit from Quantum the Time Travelling Train. Similarly there was no sound like Skratch the Cat yelling from a high place. "You interrupted basic maintenance!" "No time for that," said the Wabbit. "Some Fracker's giving us grief." "I have no time for these Frackers," said Quantum. The Wabbit was uncertain of Quantum's rank but he felt under pressure. "You will make time available." If there was anyone that could make time available it was Quantum. Everything froze and the Wabbit shouted "Ideas!" then looked around. "Now!" he yelled for good measure. "Now there's no now," said Wabsworth, who seemed to have recovered. "Or rather," said Lapinette, "there's a series of not nows." Jenny looked at her hat which hung motionless. "Now I've lost my hat." The Wabbit sighed and looked at Quantum. "We have the time and you have the energy." "Then shoot it," said Quantum. This was not what the Wabbit expected. "With the Arrow of Time?" asked Lapinette. The Wabbit looked puzzled. "Entropy," said Wabsworth. "We'll run the Fracker backwards ..."
at March 20, 2015