17. The Wabbit and the Reverse Frack 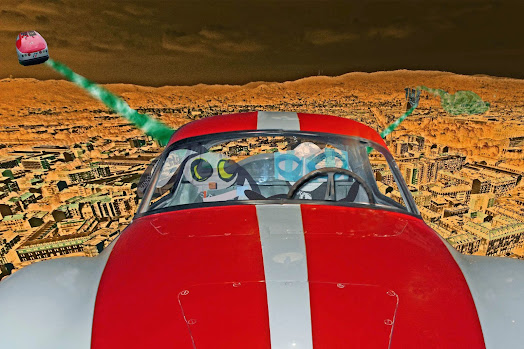 "I feel floaty," said the Wabbit. "I do too," said Lapinette. "You're not really here," said Turbina the Jet Car, "how does it feel to be avatars?" "Fuzzy," said the Wabbit. "You have the crystals?" asked Turbina. Lapinette looked at her paw and she could see them now. They pulsed blue and twinkled as they shifted in some kind of spooky space. Turbina's turbine whined as it picked up speed. "Place them in my glove compartment." The sound of a jazz saxophone filled the cabin. Turbina's voice commanded everyone to wait and it seemed like an age - but just as the saxophone reached a crescendo, Turbina spoke softly. "Quantum ... now!" and a broad green beam shot from the train. Turbina captured it like a goalkeeper and they both jolted as she focused it into a line with no thickness. The Wabbit's eyes shifted to the mirror and he was surprised he could see the line. It moved silently and rapidly, bending round buildings in its way before it smashed into the Fracker with the devastating sound of a thousand earthquakes. Through the noise of fracturing and shearing rock, the Wabbit thought he heard a voice groan from the Fracking Entity. "Frack! Gas! Shale!" "Not on my watch, Fracker," muttered the Wabbit. Silence fell and they all drew a breath. "Frankly Commander," said Turbina, "I didn't think that would work." The Wabbit grinned. "It must have been the music. Who was it anyway?" "I know," smiled Lapinette. "That was Bunky Green."
at March 25, 2015