13. The Wabbit and the Big Frack 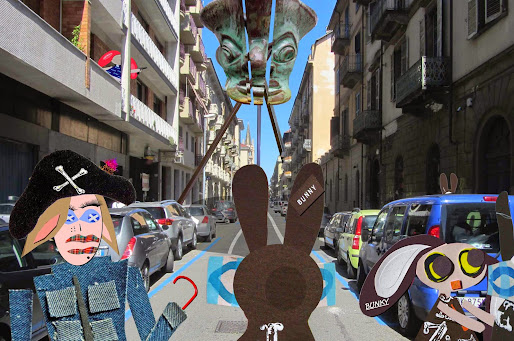 The team hit Lingotto running and they thought they'd shaken the Entity. But the Wabbit looked down the street and there it was. Tipsy vaulted onto a balcony and unleashed a hail of gunfire to no avail. The Entity was slow but its tripod legs could measure streets in one stride. "Stop!" yelled the Wabbit. To his surprise the Entity stopped. Jenny tilted her hat. "The message from the Broccoli Brigade! It was to warn us." The Wabbit had a think. "Go!" he shouted. The Entity snaked out a leg. "Stop!" commanded the Wabbit. The Entity froze. Jenny nudged the Wabbit with her hook. "Commander, it seems it will talk to you." "OK, Fracker," nodded the Wabbit, "what do you want?" The Entity's voice boomed over the roof tops. "I want to frack." The Wabbit scowled up at the Entity but it looked down and shouted. "Gas, shale, frack!" Lapinette winked at the Wabbit. The Wabbit winked back. "Look, Bunky, I know who you really are." "I know you know," confessed Lapinette. The Wabbit sighed. "So what would you do, Bunky?" Lapinette laughed. "I'd confuse it." The Wabbit wheeled around and addressed the Entity. "You have no fracking license." The Entity rattled its tripod legs and moaned. "Where do I get one?" "The Castle," said the the Wabbit. "Maybe I don't need a license." said the Entity. "You came from nothing," said the Wabbit slyly. "But now you may go to the top." "I prefer to go to the bottom," said the Entity. The Wabbit smiled. "You'll have to fight your way down."
at March 16, 2015