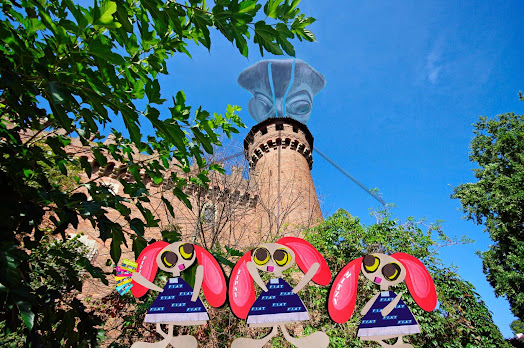 The Fracking Entity materialised at the Castle but so did Tipsy and the rest of Lapinette's personal guard. It was an attempt to buy time while the Wabbit concocted a plan, and in order to sow confusion, they were in theatrical mode. "What fracker comes?" they chanted. "I've here for my license," boomed the Entity. Tipsy hopped forward. "What kind of licence would you take?" Fitzy looked up. "A dog licence maybe? " Mitzy looked up too. "A driving licence? I can get you one cheap." "I want a fracking licence!" shouted the Fracking Entity. "It's not as simple as that," said Fitzy, "because first you need an Exploration License." "Then you'll need a Development Licence," said Mitzy. "I want a fracking Drilling License," yelled the Entity. "Well that's a pity," said Tipsy, shaking her head sadly, "... because you're at entirely the wrong Castle." "Aaaaagh" shouted the Entity. "I think we could start you off with an Options License," said Fitzy. "See how you get on," suggested Mitzy. "OK," sighed the Entity with a weary tone. "But then," said Mitzy, "to get an Options License you first require a Preliminary Waste License." There was a sigh of exasperation. "How do I obtain that?" "You can get one at the other Castle," said Tipsy. The Entity groaned. "And how do I get there?" Fitzy pulled out cards. "You'll need a Travel Permit."
at March 18, 2015