2. The Wabbit and the Dancing Trolls 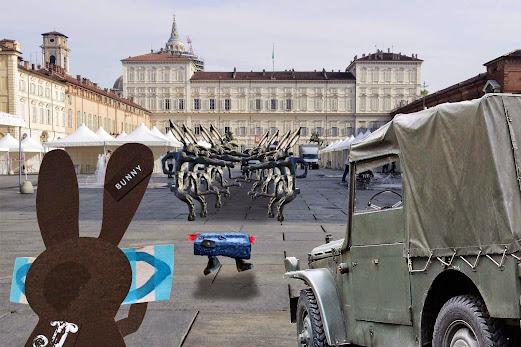 There seemed to be some event going on in the Piazza, so the Wabbit drew up and both he and the Stone hopped out. "I hear bonnie music," said the Stone. "Let's have a look," said the Wabbit. In the distance the Wabbit thought he could see Folk Dancers, but as they drew close his expression changed - now he made out the awful features of his enemies, the Agents of Rabit. The Stone jumped in the air and did a wee jig. "Heuch!" he yelled and he bounced up and down oblivious to the Wabbit's dismay. "Stone," shouted the Wabbit over the music. "Stone, we'd better be getting along." "Ach," said the Stone. I like this." He birled left and right and his boots made a clackety sound on the paving stones. It was the clackety sound that did. An Agent in the centre of the dance turned very, very slowly to the left and stared the Wabbit right in the eyes. "Stone," called the Wabbit. "Just turn in a casual fashion and make your way back to the jeep." The Stone couldn't help it. He had to look round. "My Goad," he cried. "Whit are these creatures of repellent aspect?" The Wabbit smiled a lopsided grin and hopped towards the jeep. "Let me buy you lunch," he said. "Oh aye," said the Stone and still dancing he made his way to join the Wabbit. But as the Wabbit started the engine, the Agents of Rabit danced in formation round the jeep and leered through the windows. "Good music all the same," said the Stone. The Wabbit grimaced. "The Devil gets his pick."
at July 02, 2014