1. Lapinette, Jenny and the Wasps 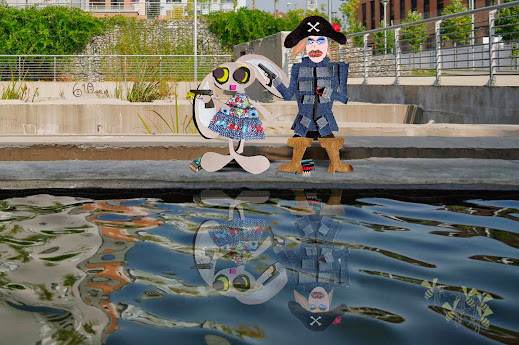 Jenny was homesick for the sea so Lapinette thought she'd take her for target practice. In a quiet spot where hardly a soul ever went, they took pot shots at various things and talked. Lapinette's Makarov blasted and a can jumped in the air. "Where's the Stone?" asked Jenny. Her automatic chattered and a rusty sign disintegrated. "Oh, he's sure to be somewhere safe with the Wabbit," said Lapinette hopefully. "I thought I heard weapon fire," said Jenny. "Just an echo," said Lapinette. But she looked around all the same. "Did I hear a plane?" asked Jenny. She let off two shots and narrowed her eyes. "We're not far from the airport," muttered Lapinette. "It was a military transport plane," said Jenny. Lapinette fired three rounds and the ricochets voomped around buildings. Time passed and a pile of spent cartridges littered the ground. "What's that buzzing?" murmured Lapinette. Jenny scanned all about. "Sounds like insects." "It's rather noisy," said Lapinette. She put down her pistol and scrutinised the area. "Bees? Wasps? Hornets?" suggested Jenny, but Lapinette was staring intently at dancing yellow reflections in the water. Suddenly she nodded to herself. She picked up her Makarov, ejected the cartridge and inserted another. Then she made certain she had spares handy. "Trouble?" enquired Jenny. Lapinette looked up to the sky. Jenny followed her gaze and gasped, "Lud rot my vitals, they're huge!"
at July 09, 2014