3. The Wabbit and Singing the Stone 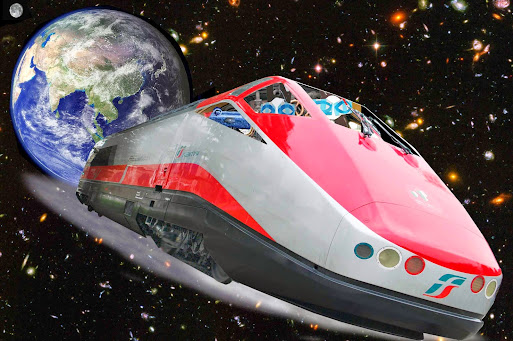 Leaving Skratch and Rabbit Jenny to trade decoy stones, the Wabbit and Wabsworth flew out with the real Stone on board Quantum, the Time Travelling Train. "Ooooh, this is braw" said Stone as he stared out into space. "Shall we sing?" said Quantum, "we always sing." The Wabbit nudged Wabsworth because he knew Quantum was referring to the two occasions it had actually happened. "You start, Wabwsorth," he smiled. Wabsworth put a paw over one ear and adopted a nasally folk voice. "Oh, I tell you a story of a powerful State/ but over the years it just wisnae so great/ It got down on its knees and it started to pray/ For the Stane that it needed was stolen away." "Too-ra-loo," sang the Wabbit. "Too-ra-lay," sang Quantum. "Wi’ a too-ra-li-oo-ra-li-oo-ra-li-ay" sang the Stone. Everyone laughed with delight. "Hang on," said the Wabbit as the radio hummed. "There's something on sub-space." "I'll try to get a better fix," said Wabsworth. The cabin echoed to strange syllables but they listened intently. "This is KOI-3284.01," said a voice. "Speak," said the Wabbit. "Our homeworld is the Planet of the Stones. You are singing our anthem." "Oh yes," growled the Wabbit suspiciously. "Then sing me some more." An instrument played notes they had never heard before and then a deep voice sang. "There's none here with courage to challenge your claim/ that you have the true and original Stane." "Red alert," said the Wabbit.
[braw: adj. Scots, fine, excellent.]
at July 25, 2014