5. The Wabbit in Chemical Avenue 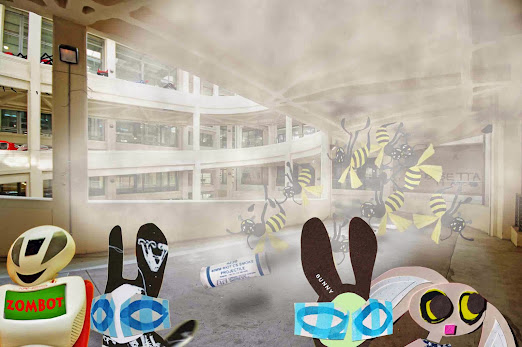 On the upper levels, Jenny, Skratch and the Stone watched as the Wabbit and Lapinette started to run. They were closely followed by Wabsworth and Robot, but Wabsworth threw the canister over his shoulder as he had seen the Wabbit do many times before. The canister bounced along the concrete ramp. Then it rolled towards the Voodoo Wasps and stopped. For a moment nothing happened and there was a cry of derision from the Wasps. But the can started to hiss and suddenly billowing clouds of smoke enveloped them. They started to cough and drop, then lay in heaps of thrashing legs and wings. The Wabbit could hear them croaking and he shed a slight tear - not from sympathy, but ingestion of some of the fumes. "Where did you get the gas?" coughed the Wabbit. "I found it in the coat you gave me," said Wabsworth, "for a while I thought it was breath freshener." Lapinette spluttered. "Let's get to a higher floor." Turbina the Jet Car headed down the ramp to pick them up and they quickly crammed in. Lapinette seized the wheel because the Wabbit was queasy and had turned a delicate green. "How many enemies are there in this town?" asked the Wabbit. "How many have you got?" replied Lapinette. "They just keep coming," said the Wabbit. "I really can't help it." "Napoleon was right." stated Lapinette. The Wabbit raised a tearful eye and pre-empted her. "Never interrupt your enemies when they're making mistakes."
at July 18, 2014