3. The Wabbit and the High Chase 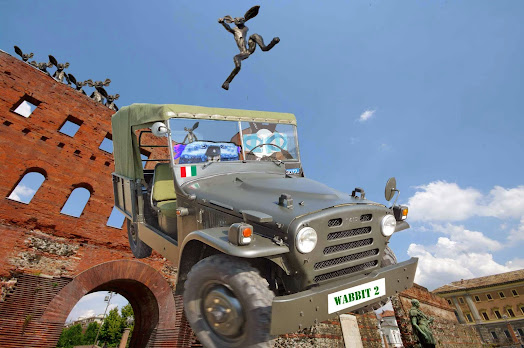 The Wabbit took the shortest route but it wasn't the easiest. It involved climbing near vertically up the Roman walls and flying off the other side. This the Wabbit accomplished at the cost of the passenger door he had previously kicked. The Agents of Rabit swarmed up the walls in pursuit, but they hadn't reckoned on the Wabbit's manoeuvre. It was what he called the Jeep Jump, which he only used in emergencies because it gave him dyspepsia. "How's your tummy, Stone?" asked the Wabbit as Agents fell from the wall with varying degrees of suprise. "I don't have a tummy exactly," said the Stone. His ears had turned a delicate mauve-blue and now he could feel the effects of  his long journey. "Where did ye learn to drive anyway, laddie?" "Tank Destroyers," murmured the Wabbit. "Aye," nodded the Stone. His ring-like eyes flickered to the rear. "Who in the name of all that's holy are these scunners?" The Wabbit scowled and peered through the cloudy windscreen. "They're Agents of Rabit, our oldest sworn enemy. They want to destroy us." "Ach, enemies," said the Stone. "They haud around much longer than friends, but what do they want wae me?" "Well, it's usually not about the money," sighed the Wabbit. "What it's aboot then?" asked the Stone. "World domination and enslavement," said the Wabbit. "Step on it son," growled the Stone. "We'll hae none a' that!"
[Scunner: Glasgow dialect. An annoying person]
at July 04, 2014