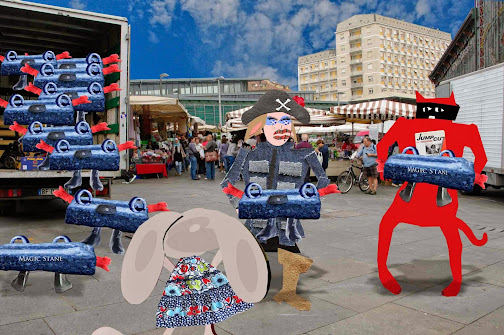 In Turin, the fake Stones were taken to the market in a borrowed truck. "We have to put up a show, Skratch," said Jenny. Skratch had been a Cat Burglar and knew a few tricks. "I think I can manage!" he laughed. But Jenny was a pirate and tricks were her stock and trade. "I propose we don't sell the Stones at all." Skratch looked puzzled. She put down her stone and rocked back and forth like a pirate. "Clients have to buy into our scheme." Her eyes twinkled. "They don't buy the Stone?" asked Skratch. "No," said Jenny, "Someone pays us €1000 to be a Member of the Stone Club." "What next?" said Skratch - although he knew what was coming. Jenny swayed. "When they bring us 8 more paying members, they receive a Stone as a gift and €8000." "Ah," said Skratch, "Each of these new members recruit another 8 members," said Jenny, "at which point they receive a gift and money." "Most profitable," said Skratch, "but this system is doomed to collapse." "I know," smiled Jenny. "It will last long enough to spot the enemy." "How will we recognise them?" asked Skratch. "They'll know the trick," said Jenny, "and they'll try to trick us." "No-one can trick us," said Skratch smugly. "Then we pounce," said Jenny. Skratch threw back his head and laughed. "We need our shill," said Jenny. Skratch saw Lapinette come round the corner and nudged Jenny. "Here she is now." "Ahaaahrr there, young rabbit," said Jenny. "Wanna be a member?"
[shill: an accomplice of a confidence trickster who poses as a genuine customer to entice others]
at July 28, 2014