14. The Wabbit runs into Trouble 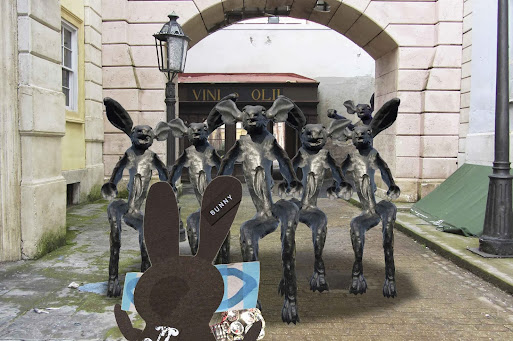 The Wabbit made a swift getaway but not swift enough. As he rounded a corner, he came face to face with an elite corp of the Agents of Rabit. The Agents looked at the Wabbit and they didn't look pleased. "Think you're smart, Wabbit?" said one. "Think you're clever?" said another. The Wabbit stood stock still as only he could do. "Run out of wisecracks, Wabbit?" said an Agent at the back. "I never run out of wisecracks," shrugged the Wabbit. "You've gone too far, this time" said an Agent. "Not far enough," quipped the Wabbit. The Wabbit's ears moved gently as he listened intently, because the Wabbit had a plan. But the trouble about plans as he had come to understand, was that they needed improvisation. So he started to whistle in rather a tuneless way that he knew was intensely annoying. "Give us the ring!" shouted the Agents, edging forward. For their own part they knew that the Wabbit could be tricky, so they were cautious. But the Wabbit continued to whistle. "Cease making that noise!" said the lead Agent. "What noise?" The Wabbit managed to speak and whistle at the same time. "I can't hear a thing," said the Wabbit. "It must be the wind." The Agents could feel no wind and they shook their fists, but the whistle got louder and louder and louder.
at January 10, 2014