12. The Wabbit and Android Recovery 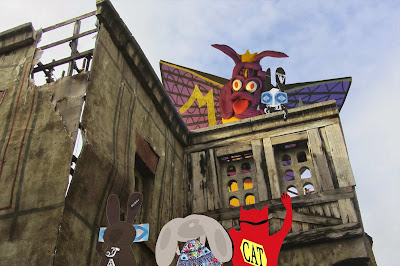 "There he is!" shouted Lapinette. Moloch gripped Wabsworth tightly as he peered over the top of the damaged building. "How did Wabsworth survive the blast?" muttered Skratch. Moloch laughed. "He tells me he was recently retro fitted with an outer membrane of blast-proof silicone." "Now everyone will want it," sulked the Wabbit. Wabsworth hung on as the roof shook. "So much for your trick, Wabbit," cried Moloch."The Agents of Rabit still possess my ring." "There's more than one way to knit a sweater," said the Wabbit. "Oh yes Wabbit?" queried Moloch, "surely you're not spinning me a yarn." "Let's workshop it then," said Lapinette. The Wabbit rummaged in his fur and took out a hammer, saw and a piece of wood. Everyone groaned except for Moloch who howled. Wabsworth clung to the swaying parapet and called down with an angry voice. "I propose luring them across concealed pits lined with sharp spikes," "They'll never fall for that one," said Skratch. "I still go for fake rings," said the Wabbit. "They won't be expecting the same dodge." Skratch grimaced. "The Wabbit always rings twice?" "Nothing better than rings to get 'em nosing around," grinned the Wabbit.
at January 04, 2014