6. The Wabbit welcomes them In 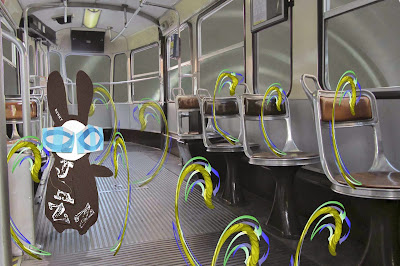 The Wabbit made a spur of the moment decision. "Zion tram is coming our way," he sang and he made a sign to Nine the Number Nine Tram. There was a hiss of compressed air and the tram doors folded closed. "The Zion Tram is coming your way, get on board," he shouted to the creatures. "Oh get on board! You better get on board!" One by one the creatures boarded the tram and took their seats and waited. "You got to catch a tram," sang the Wabbit, "because there is no other station." "Then we going in the same direction," sang the creatures. "Ooh ooh!" sang the Wabbit. Nine the Tram took that as his signal and folded his doors, then with an imperceptible shudder, he started to move. "A wa do dem? A wa do dem dem dem?" sang the Wabbit. "A we nuh know - a we nuh know," scatted the creatures. Nine the Tram began to glide through the Late Tunnel like a merchant ship leaving port - and as he gained momentum he gently intoned a Reggae dub. "This Tram," said one creature. "has come to take us home," said another.  "Don't worry about a thing, oh no!" said the Wabbit kindly and he made for the driver's cabin. "'cause every little thing gonna be all right."
at November 04, 2013