7. The Wabbit in the Flash Frame 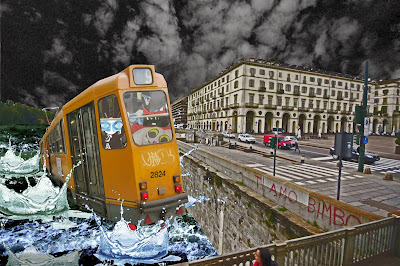 "But how do we get to the Late Tunnel?" asked Lapinette. "This way!" said Nine, the Number Nine Tram and he jumped off the bridge. "Aaaaagh!" shouted Wabsworth as the sky turned black and buildings stood out like pop up pictures. The river churned as Nine plunged beneath the surface. "Don't people see that?" asked Skratch. "Vaguely" said Nine. "Oh, people can be quite unaware," smiled Lapinette. "I think they see it but they don't believe it," said the Wabbit, "then in a twenty-fifth of a second we've gone." "Like a flash frame!" said Skratch. "We'll be there in a flash!" said Nine, "so please relax and soon we'll be in the grey zone." "Let me get this exactly right," said Wabsworth. "If we're late, we can stay in the Late Tunnel?" "Then we materialise somewhere ahead, appearing to have maintained our schedule," said the Wabbit and he clapped his paws in delight. Wabsworth looked a little worried. "I don't know Wabbit, In physics you get nothing for nothing." "Sometimes you get less," laughed Lapinette. "What is nothing anyway?" asked Skratch. "There is no such thing as nothing," said Wabsworth. There was a sudden hiss of compressed air. "Except in the Grey Zone," said Nine.
at November 27, 2013