7. The Wabbit and the Big Splash 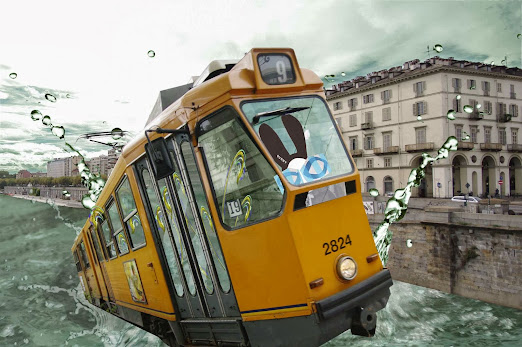 The Wabbit knew one thing - he had to be his normal self. So he hit the control handle a brutal swipe and Nine the Tram took off at speed. With a hissing of air and clanging of bells, the grey tunnel turned blue-green. Now the Wabbit gazed up through limpid water to an eerie light. "Secure ventilation!" shouted the Wabbit. "and shut the bulkhead flappers!" "I'm a tram, not a submarine," yelled Nine. There was an enormous splash as Nine broke through the surface and shot into the air. "I-ree!" cried the creatures in the back of the tram and one leaned forward and spoke to the Wabbit. "Fra wha pawt yuh deh? Me hear dem say yuh frah Africa?" The Wabbit groped in his fur for his universal translator. "Mi no dryland tourist," he said simply. "I fass and facety?" shrugged the creature. The Wabbit smiled and quivered his ears. "Just kidding," said the creature, taking a seat. There was a shudder and a whoosh as Nine shook off water like a big dog. "You know you're stuck with them now," he whispered. "Why is that?" asked the Wabbit. "They think you're Cunie, the African Rabbit God." "Cunie," mused the Wabbit. "I've been called worse."

Irie/I-ree A cry of delight.
Fra wha pawt yuh deh?: Where are you from?
Mi no dryland tourist.: I've travelled beyond my home country.
Fah and facety: Too inquisitive
at November 06, 2013