6. The Wabbit arranges a Trip 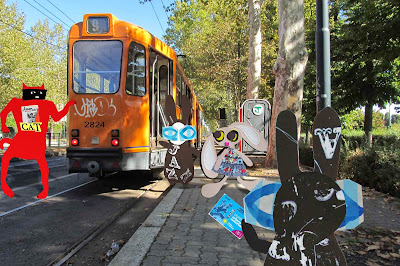 The Wabbit made a call and within moments, Nine, the Number 9 Tram rumbled into sight. Skratch the Cat pointed to Nine's rear and the Wabbit was aghast. "My goodness Nine, where did you get the graffiti?" "The Saturday football run," said Nine. The Wabbit shook his head sadly but ushered everyone on board. "Where's Wabsworth? He's late." "Here he comes now," said Lapinette. "I went for tickets," said Wabsworth. The Wabbit shook his head again. "We're going to the Late Tunnel and tickets don't exist for this zone." "Well, you never know," said Wabsworth. Nine made a hiss of compressed air. "There are no inspectors in the Late Tunnel," he said. "Please take your seats." "Is there any food? asked Wabsworth. "I have some small Jamaican dumplings in plastic packs," said Nine. The Wabbit scowled because his aversion to dumplings was well known. "We can always use them as ammunition," he quipped and he firmly waved a paw towards Nine. Lapinette hesitated. "What's the Late Tunnel like?" "Relaxing," said the Wabbit. The friends took their seats as advised and reggae music filled the tram. "Who's singing?" asked Skratch. The Wabbit effected a knowledgeable stance. "Eek-A-Mouse!" he smiled. "Where?" yelled Skratch.
at November 25, 2013