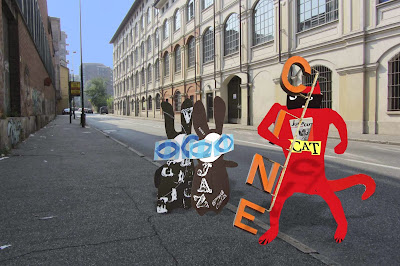 Acting on information received, the Wabbit and his android double, Wabsworth, hurried to Via Pianezza to meet Skratch. "Skratch!" shouted the Wabbit. "What's with the sign?" Skratch looked very relieved, but smiled all the same. "Wabbit, you know perfectly well that a sign doesn't really exist. It is merely a concept." "It looks like quite a heavy concept," said Wabsworth. Skratch winked at Wabsworth. "It appeared from nowhere," he said. "It materialised?" suggested the Wabbit. "No," said Skratch, shaking his head. "It kind of swam into focus." The Wabbit and Wabsworth looked at each other, then Wabsworth turned to Skratch. "Things have been disappearing," he explained, "and they lose focus first." They thought in silence for a while, but the Wabbit was the first to speak. "Objects are disappearing," he said raising a paw.  Everyone nodded. "And objects are appearing," he added, raising another paw. Everyone nodded. The Wabbit spread his paws wide. "But they are not the same objects!" "That's obvious, Wabbit," purred Skratch. Now Wabsworth looked at Skratch. "What are you doing with the signifier?" "Taking it back to Cine Spezia in Via Nizza," said Skratch. "That's an adult cinema," exclaimed the Wabbit. "Is it?" said Skratch. "I thought it was experimental."
at November 18, 2013