The Wabbit Talks the Talk 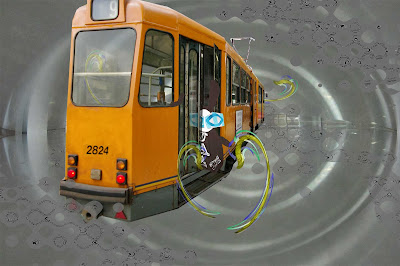 The creatures wanted a confidential discussion so the Wabbit went to the rear of the Number Nine Tram. They spoke and the Wabbit listened attentively. "What are they saying Wabbit?" asked Nine impatiently. "Just a second," said the Wabbit. Then he held up a paw and nodded his head vigorously. "All right Nine, I have it."  Nine, the Tram waited patiently. "In order for them to continue offering the Late Tunnel service, they would like some quid pro quo." stated the Wabbit. "And what exactly is this quid that I should quo?" said Nine. "While you're down here," said the Wabbit, "the creatures would like entertainment." There was a long silence. "They feel it's only fair," added the Wabbit. "What kind of entertainment?" queried Nine. "They like music," said the Wabbit, "can you sing?" "The Number Nine Tram laughed and burst into a blues. "Hey Mr. Judge, your trams are coming down the line. The cargo ain't too much if you can chase the friends of mine." The Wabbit threw back his head. "I heard they smuggle in the goods, along the western union line." He bent down to the creatures and talked for a long time. "What did they say?" asked Nine. "They prefer Reggae," said the Wabbit. "Zion Tram!" said Nine.
at October 30, 2013