The Wabbit in the Adventure Caffè 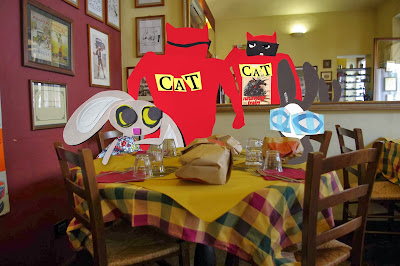 The Wabbit found Lapinette and Skratch the Cat at the Fiat Caffè in Lingotto. He was right on time because the bread had arrived. So he slid into a seat and clutched his bread possessively. "Hello Wabbit!" Skratch had just had his fur trimmed and he studied himself in the mirror. "Do you like my new Runaway Train t-shirt? I couldn't find anything about a tram." "I do like that movie," said the Wabbit. "But life isn't like a film." "Good thing too," said Skratch, "it would be an incredibly long movie and no-one would watch." Now the Wabbit smiled. "Not even if Andy Warhol made it?" Skratch made a long snoring noise then flinched from the withering glance of Lapinette. Now the Wabbit leaned forward and spoke to Lapinette. "Anything on the wire?" he asked. "What wire?" asked Lapinette innocently. "You know," said the Wabbit, "anything in the offing? What transpires?" Lapinette pretended to look puzzled, so the Wabbit addressed Skratch. "What's going down?" he muttered. Skratch grinned at the mirror. "You gotta chill. So take it easy. Put up your paws." But the Wabbit's paws were itching for another adventure. "I need a new assignment," he shrugged. "Details are on your desk," smiled Lapinette.
at November 11, 2013