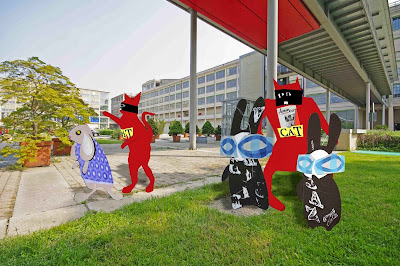 The friends waited until the hop-on hop-off bus reached Lingotto, then dived round the back of the shopping centre. The Wabbit nudged Skratch. "I told you so!" he murmured. "Told me what? replied Skratch. "There was more to come," said the Wabbit, pointing with a trembling paw. "Have you ever seen anything like it?" "In a nightmare," said Skratch, "I once dreamed we were all ghosts who haunted shopping centres until the end of time." The Wabbit shuddered. Wabsworth flicked his ears. "They're not ghosts exactly." Skratch looked at the Wabbit. The Wabbit looked back, then turned to Wabsworth. "What do you mean exactly?"  Wabsworth's ears flicked again. "I'm picking up a strange signal that suggests they're partially entangled." "Entangled with what?" asked the Wabbit. "Entangled with us," said Wabsworth. "Well I don't want to be entangled," said Skratch, "I'm against it. And that cat is all wrong." Wabsworth's ears quivered. "It's something to do with the Wabbit." The Wabbit flinched. "Wabbit, have you been anywhere strange lately?" Now the Wabbit shrugged defensively. "Only the Late Tunnel." Wabsworth's brain whirred. "Can you get us back there?" I suppose I can," said the Wabbit. "Do you have any spare lunch vouchers?"
at November 22, 2013