4. The Wabbit & the Giant Drink 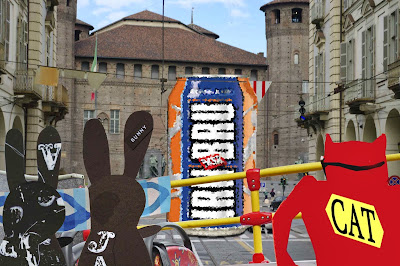 The Wabbit, Wabsworth and Skratch the cat hopped on the hop-on hop-off bus and acting on advice from a secret source, waited patiently for it to reach Palazzo Madama. Wabsworth insisted on paying for three tickets even though the Wabbit had a pefectly amicable arrangment with the driver. The Wabbit shook his head sadly. "That will do for 24 hours," explained Wabsworth. "We might need more time." "You might be right." Skratch pointed to the street. "Just look at that!" The Wabbit gazed in amazement as a giant can of his favourite drink materialised in the street. "It's crystallised," said Wabsworth. "Maybe someone left it too long in a freezer." The bus stopped for quite a while because traffic had come to a standstill. "Shall we get off?" asked Skratch. "No," said the Wabbit. "I think there's more to come." A whirring sound came from Wabsworth and the Wabbit looked round. "It's my positronic memory," said Wabsworth. "It's reminding me it's time for a snack." "But you're an android," puzzled Skratch. "That doesn't mean I don't get hungry," said Wabsworth, "so what shall we have to drink?" "Let's hop off and have an aperitivo," suggested the Wabbit. "Don't these buses have bars?" asked Skratch.
at November 20, 2013