8. The Wabbit and the End of the Line 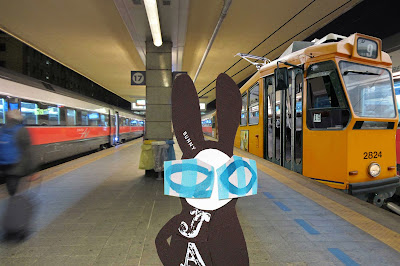 The Wabbit dropped the Reggae creatures at the dance hall in Via Nizza and drove Nine, the Number Nine Tram into Porta Nuova station where it squeezed beside a Big Red Train. Now Nine looked massive and railway passengers looked confused. The Wabbit paid no attention and hopped off. "Goodbye Nine and thanks," he cried. "I learned a lot!" Now he hopped his way along the platform, wondering what to do next. The Wabbit was disappointed that his tram ride was over and he made a face. He was about to encounter what he most disliked - between adventures ennui. He hated the lull that came with any kind of interim. "You can't always be having exciting adventures," he told himself. Suddenly he heard the hissing of compressed air and the clang of a bell, so he turned. "Life is an adventure," Commander Wabbit," shouted Nine. "There's something new around every corner!" The Wabbit grinned and thought of his friends. "Probably they're waiting for me at the Adventure Caffè," he thought. "I've such a lot to tell them." "Commander!" shouted Nine. The Wabbit turned again and Nine let off a hiss of compressed air. "You need a ticket the next time!"
at November 08, 2013