2. The Wabbit and the Vanishing Objects 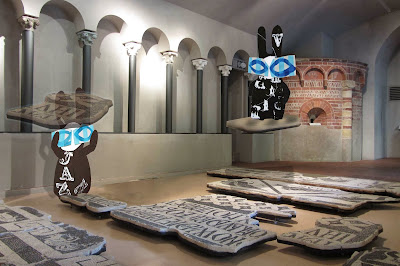 The Wabbit met his android double, Wabsworth, at the Palace to discuss the question of the disappearing objects - but things were already out of control. "Thank goodness you're here Wabbit!" yelled Wabsworth. "I've been trying to keep things from vanishing by standing on them, but I just end up on the floor." The Wabbit watched a piece of mosaic go out of focus and tried to grab it, but it floated into the air, became transparent and disappeared. "We have to be more organised," said Wabsworth, "or the whole city will dispppear and us with it." "What!" shouted the Wabbit. "Have any of our friends vanished?" "Not yet," replied Wabsworth. "But Lapinette's lost her whole wardrobe." The Wabbit cringed. "I'll bet she's hopping mad, Anything else?" "Wabsworth lurched down from a rapidly fading artefact and stared at the Wabbit. "She said your secret stash of Irn Bru lemonade had gone." The Wabbit turned pale. "This means war!" he shouted. He shook a paw at the ceiling and paced the length of the room. "The laws of physics say these things will show up somewhere." he decided. "What kind of somewhere?" asked Wabsworth. "The middle of somewhere," said the Wabbit.
at November 15, 2013