4. The Wabbit and the Tunnel Creatures 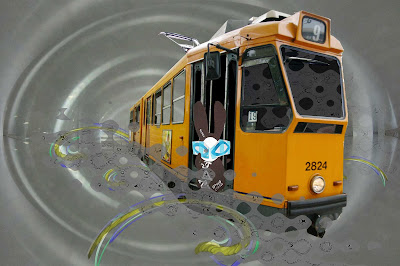 The Wabbit hopped down from the driver's seat. "Open the door, Nine," he said firmly. "We never open doors in the Late Tunnel," protested Nine. "There's a first time for everything," said the Wabbit in an irritating manner he had learned from his grandmother. "On your head be it!"" said Nine. "Don't come hopping to me when it all goes wrong." There was a hiss of compressed air and the doors folded open. The Wabbit slung a paw round a rail, leaned out and peered down. "Ah" he said screwing up his eyes. "Um," said the Wabbit peering further. "Ah," he said again. "Oh please Commander," sighed Nine. "May we dispense with the interjections. What can you see?" "I recognise your creatures," said the Wabbit, much as if he saw them every day at the supermarket. "Enlighten me," said Nine. "They're equations," said the Wabbit. "They make your neat little late system work." "Let's just leave them be," said Nine with a hiss of compressed air. "Let's close the doors and be on our way." Nine's motor started to whine. "Hang on Nine," said the Wabbit. "They seem to want something." He bent a little nearer and murmured something in algebra. There was sqeaking sound and a sharp click. "They'd like more in their wave packets," said the Wabbit.
at October 29, 2013