1. The Wabbit - the Reluctant Passenger 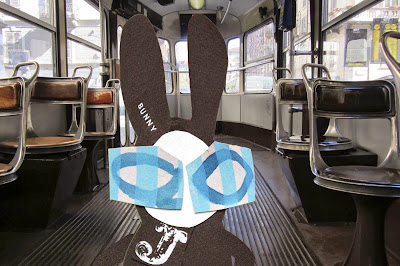 The Wabbit found himself back in the Number Nine Tram, which seemed to be heading along its normal route to Corso Massimo D'Azeglio. He was thinking things over and the rattle of rails and hum of nearby traffic became so hypnotic that he was all but lost in reverie. Suddenly the tram braked harshly and the Wabbit nearly fell off his seat. "That's enough thinking," shouted the Wabbit to empty air. His words bounced round metal and wood and returned to stare him in the face. "OK, that's it!" he said. "Passenger no more!" and he hopped up from his seat and made for the driver's cabin. Tram Number 9 increased speed and tore round the corner from Via Madama Cristina. The Wabbit grabbed a paw rail and screamed at the top of his voice. "I'm taking over, Nine." There was no reply. "This cost me all my lunch vouchers and I'm going to drive," yelled the Wabbit. Nine the Number Nine Tram switched points and coasted onto Corso Massimo. "I've lots more to show you," he said, with a hiss of compressed air. "Yes, but I'm in charge," said the Wabbit and he advanced menacingly on the cabin door. "Don't you like being a passenger?" asked Nine. "It never sat well with me," grimaced the Wabbit.
at October 21, 2013