2, The Wabbit takes Over 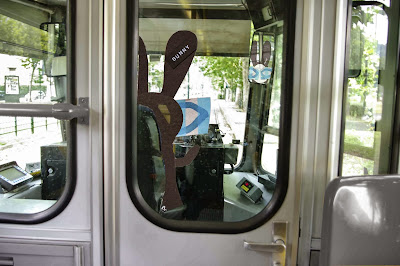 The Wabbit jumped into the tram driver's seat and slammed shut the cabin door. "OK Nine, I'm in charge so I'm going to check everything is in place." Compressed air hissed and the passenger doors closed. The Wabbit nodded approvingly. "Do you have a vigilance control system and logic speed control?" he asked. "Yes," said Nine. "Where?" said the Wabbit. "There," said Nine. The Wabbit noticed they were switched off, so he leaned forward and switched them on again. Then, after a brief thought, he stretched out a paw and flicked them back off. "Do you have plenty of braking sand in your reservoir?" he asked. "I do," said Nine. "Pantograph?" said the Wabbit. "Foot pedal," said Nine with a hiss of compressed air. "Dead Rabbits Handle? asked the Wabbit. "Not necessary," laughed Nine. "And remind me Nine," grinned the Wabbit, "of who exactly is in control of the Tram?" "My driver is Commander Wabbit of the Department of Wabbit Affairs," said Nine. "Tell me one more thing Nine," said the Wabbit. A silence fell, only to be broken by another hiss of compressed air. The Wabbit pointed at a cluster of instruments. "Precisely what," asked the Wabbit, "does that red button do?"
at October 23, 2013