4. The Wabbit in the Milky Way 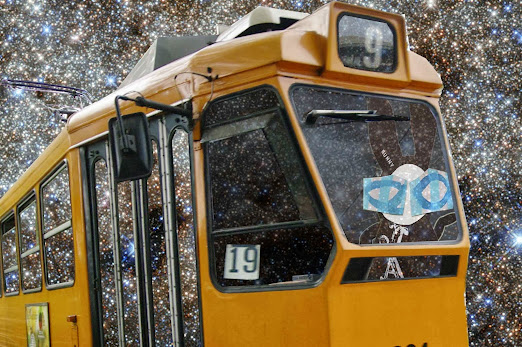 Suddenly everything changed. Nine, the Number Nine Tram emerged from the tunnel to an extraordinary scene and the Wabbit looked out at billions of stars, trying to recognise where he was. "Mostly Red Dwarfs," muttered the Wabbit. "Well at least it's my own galaxy." He shrugged at his reflection in the glass and relaxed. Everything was so unbearably quiet, he could hear his heart beat. The Wabbit let go of the control handle and poked the window with his paw and thought long and hard. "I'm used to being in charge," he thought, "but maybe I can't be in charge of everything." He rummaged in his fur and extracted a list of "Things to be in Charge Of" and a stubby pencil. The Wabbit licked the end of the pencil, added "trams" to the list and stuffed it back in his fur. "You can't be in charge of trams," said Nine. The Wabbit stared at the console, then tapped it with his paw. "Now look Nine," he said. "Let's drop this poor tram nonsense. What's going on?" "Look at your reflection, Wabbit," said Nine. "and tell me what nine means to you." The Wabbit reflected. "Nine is where we return to the One," he said. "The Cosmos. The life and death cycle." There was a hiss of compressed air. "I have things to show you," said Nine. "I thought you'd say that," sighed the Wabbit.
at October 07, 2013