The Wabbit and the Emergency Stop 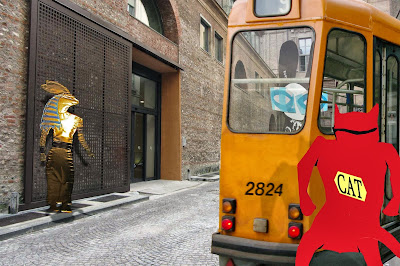 Nine the Number Nine Tram vanished back into the tunnel and emerged somewhere the Wabbit vaguely knew. And there was Skratch the Cat looking urgent and Unut the Rabbit Goddess too. The Wabbit squinted at Skratch. "Look Skratch I'm on a Tram journey," he said. "What's the deal?" "An emergency stop overrides the itinerary," interrupted Nine. "What kind of emergency?" asked the Wabbit. Skratch looked up at him. "This is the trade entrance of the Egyptian Museum," he explained. The Wabbit felt that Skratch was unusually flustered. "I'm aware of where we are, Skratch," he answered softly. "Well, Unut is waiting for you, and she can't keep the door open long." The Wabbit paused. "You have to go," urged Skratch. The Wabbit felt like shrugging but his shrug stayed in his shoulders and he slowly put a foot out of the tram. "Come on Commander!" shouted Unut. The Wabbit stopped. "When I visit, I usually go in the front entrance," he thought. "Will you please stop thinking and do as you're told?" yelled Unut. The Wabbit wasn't predisposed to doing what he was told, but Unut was a Goddess and he usually made an exception. "OK," he said and he jumped down. "Hop this way," said Unut. "Hop like an Egyptian," murmured the Wabbit.
at October 16, 2013